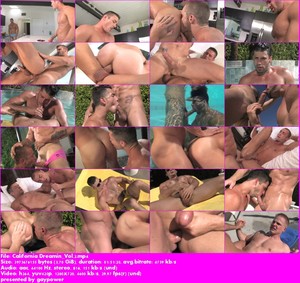 Put a hard dick in front of Ray Han and he’ll take it at either end. Splashing in the pool, he makes dreamboat Lance Luciano peer out from behind his shades. The need is instantaneous and their oral session is lip-smacking good, and it ends with underwater cumshots. Ray puts his other end to work for Liam Magnuson in the hot tub. Liam is hot-n-ready to probe Ray’s throbbing ass. Nifty camera work shows part of the action reflected in a pair of Ray-Bans on the ground. Trenton Ducati’s cock is a curved prize. His tongue and fingers stoke a roaring fire in Donnie Dean’s bubble butt that only a rousing fuck can quench.

Hand-rubbed meat can’t be beat ? a slogan that applies to more than BBQ when Angel Rock rubs one out under the sun. His muscle-packed, furry body is enough to get anyone hard. Most guys would take a number to be crushed between his thighs. California Dreamin’ 2 is a suck, slurp and fuck fest you won’t want to wake up from.