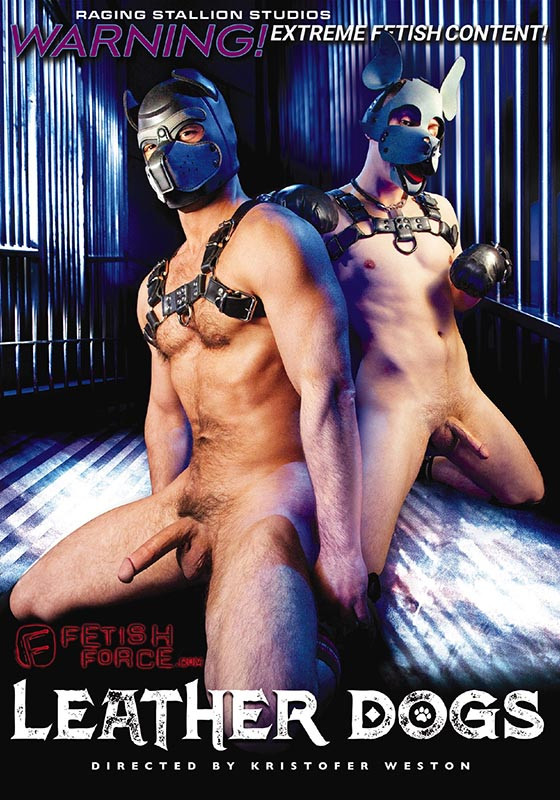 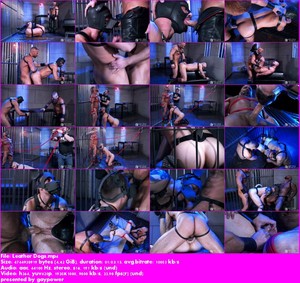 Puppy play comes to life with ‘Leather Dogs’ bought to you by Dominant director and star, Kristofer Weston! Join three leather daddies and their two eager pups, who only want to please, on the trek to obedience training and full pup fucking. Jake Morgan’s master isn’t around but Dirk Caber doesn’t see the harm in letting the pup out of his crate and giving him some training with a nice hard bone up his hole until Jake blasts a load all over his own tight body. Dirk needs to be punished for playing with Kristofer’s pup without permission, so Kristofer ties Dirk up and instructs Jake to suck on Dirk’s big bone until he blasts his load all over the floor. Jessie Colter and Dirk Caber release Pup Tyler Rush from his cage to give him a taste of their bones resulting in a creamy treat all over the pup’s ass. Pup Tyler is tied to a bed with his cock cage in place as Jessie fingers his hungry hole while Dirk teases the pup’s face with his dick. As a reward for his good behavior, Jessie and Dirk unlock Tyler’s cock to let him blast his load all over himself. When Jessie sees Tyler’s flood of cum, he pulls out and adds his jizz to the mix, leaving Tyler a sticky, panting mess. Whether these ‘Leather Dogs’ are good boys or bad dogs, their masters will be sure to give them everything they deserve.