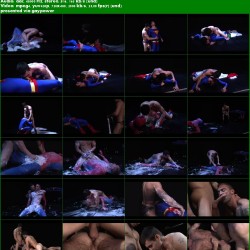 There’s a new constellation in the stillness of space. A series of stars, more beautiful and terrible than anything we have yet imagined. And when those stars align, they form a figure of imposing strength and menace. A black cloaked criminal. He has many names, but only one purpose: Total destruction. He is “The Torquer” (Johnny Torque).

Mr. Spectacular (Jack King) is the first to fall victim to the villain’s ensnaring net of deceit…and the effects of his will-weakening blue juice.

“You’re mine now,” the Torquer calmly states, straddling the hero in a display of sweet, muscular thighs. “Tables have turned…”

By way of the seductive substance, Mr. Spectacular is putty in Torquer’s hands. The stubbled
super hero is manhandled and humped, made to lick and worship Torquer’s tightly muscled biceps. In a daze, Mr. Spectacular is forced to lay down, providing ample access to his perfect back, lats, and ass. The camera lingers lovingly on silver clad balls pounding against a flawless red lycra covered gluteus maximus as Torquer humps and hinders the hero, taking full advantage of his power over so beautiful a body. There can be no resistance…

Until the substance begins to wear off. Suddenly the evenly-matched men are fighting on the floor, rolling and wrestling, each determined to ascend as the victor. Long, lean legs entangle like ropes…musclebound forearms lock around necks…dominating straddles lead the way back to further body reverence, bicep licking, kissing, and cock worship.

Soon Web Wonder (a ripped and royally heart-poundingly hot Jake Genesis) arrives and is quickly incapacitated by the Torquer’s special blue foam formula, a version of his poisonous blue juice. The substance strips Web Wonder of his powers, and with the spider-like super hero so weak, Torquer decides it’s time for a real fight. With only foam and skintight lycra between them, it’s difficult to discern if these two are making love or doing battle. Hands explore hardened pecks…massive arms wrap around broad shoulders… cocks grind together almost in harmony. All the while our web-slinging Samaritan begs for no more…but does he mean it? His hands say otherwise.

At last Web Wonder is subjected to the greatest shame a super hero can know. He is stripped of his mask, revealing the stunningly beautiful face beneath. Uncontrolled and unashamed, Torquer and Web Wonder’s lips blend like drops of water, each of them giving into the passion and heat that only a super villain and a true hero can ever share. Through foam and lycra, we continue to unravel the mystery of Web Wonder, who proves to be one of the most gloriously well-hung heroes of his generation.

Overwhelmed with desire for both Web Wonder and Spectacular, Torquer summons his strength to effect change in the lair. With a wave of his hands, the trio is made sparklingly clean, stronger than ever, stunningly nude, and sturdily erect. Each man is extremely well-endowed. Web Wonder’s man tool is so huge it’s actually visible when he’s lying facedown. Jacob wrestles the angel on Web Wonder’s sizable left bicep, and an alluring layer of dark hair emphasizes every curve of his manly ass. Both master and puppet descend upon the stripped and strapping, handsome hero, forcing his beautiful lips to wrap around upward curving meat sticks and plowing his perfect, hairy hole. It’s a violent, leg stretching, ass splitting fuck, in this sweat-drenched, cum-spewing, muscle-pumping production, perfect for fans of story, sensuality, and strength.

Who will be the next set of heroes to fall victim to the terrible Torquer? Find out, in Torqued Again!