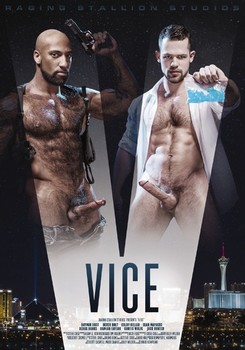 When Las Vegas is flipped on its ass by the latest sex party drug, Tsunami, local law enforcement goes undercover to bust the narco ring responsible. The effect of the drug proves too powerful for ‘Vice’ to contain and a reality film crew captures it all. Busts go awry. Is it a precinct or a brothel? Vice Squad Officer Damian Taylor has his perp, Colby Keller, behind bars. Colby won’t nark unless he gets a taste of Damian’s thick dick. Colby gets more than a taste and slides his big hairy cock balls deep into Damian’s tight ass. Back at the cartel headquarters, Beaux Banks and Jack Hunter are working for kingpin Sean Maygers packaging the goods. When Sean catches Beaux with Jack’s cock down his throat, the boss says he will fuck them both if they promise to get back to work. Derek Bolt is a Vice cop undercover in Sean Maygers’ distribution warehouse. When Sean finds him snooping, he makes him try the merchandise and soon Derek is bent over taking Sean’s thick curved cock deep inside his hairy ass. Officer Damian Taylor and detective Daymin Voss have had their coffee spiked at police headquarters. When Tsunami kicks in, Daymin tells Damian that he “wants to do gay shit” and soon his throat is being reamed with Damian’s big hard cock. After getting his face stuffed with dick, Daymin walks in to find Derek Bolt and Kurtis Wolfe making out. Their lowered inhibitions lead to a hot confession and Derek taking on both hung studs before all three of them drain their balls all over Derek’s hot, ripped body. Sometimes the line between the good guys and the bad guys is not completely defined. Who will end up on top in ‘Vice’ – the Law or the Cartel?